On friends, and the stuff they do sometimes….

I was reading Paulo Choelo recently. An article he had written included a story about Genghis Khan who went hunting in the desert with his favourite falcon. After an unsuccessful hunt, Genghis grew thirsty and searched for water. He supposedly found a small stream but when he filled his cup and raised it to his lips to drink, the falcon tore it from his hands and spilled the water. The falcon repeated this action three times. Furious at such behaviour, and desperate to drink, Genghis slew the falcon with his sword. As he threw the bird’s body in the scrub, he discovered  a dead poisonous snake in the water source – had he drunk the water he would surely be dead. The falcon had been trying to save his friend’s and master’s life…

The story put me in mind of the legend of Gelert, in the village of Beddgelert (meaning “Gelert’s Grave”) in Gwynedd, north-west Wales. A Welsh prince returned from a day’s hunting to find Gelert, his favourite hound, jumping to greet him covered in blood. The prince then saw his son’s crib empty and the bedclothes strewn on the ground. In a fit of rage he killed the dog, believing it to have slain his son. The dog’s dying yelp was answered by a baby’s cry. Behind a nearby rock, the prince found his baby son, next to the body of a large wolf, which Gelert had clearly attacked and killed. Legend has it that the Prince buried the dog with regal honours, and never smiled another day in his life. 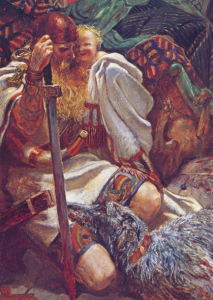 This led to thinking about our friends and the stuff they do sometimes.

We owe it to them, and to ourselves, to dig beneath appearances and uncover the true motivation in the actions of others, before we judge them.

And we need to be mindful that our own actions, if executed in anger, can never lead to positive results.